The Zero Resistance is a model of tremolo bridge with a ball bearing pivot used in several Ibanez S series guitar models. It is more commonly referred to by its initials, ZR. The ZR bridge made its debut in 2003 with the S1620FB. It is believed to be produced for Ibanez in China rather than being made in Japan by Gotoh as with other high-end Ibanez tremolos like the Edge.

The ZR employs a double locking tremolo design, meaning that the strings are anchored at both the saddle and the nut. It is the first Ibanez tremolo to feature the "zero-resistance" ball-bearing pivot system, instead of the two post and knife-edge pivot used by its predecessors. The use of ball bearing connections to mount the bridge to the body of the guitar allows the ZR to effortlessly tilt up and down with little friction. The ZR is one of very few tremolo bridges in the market relying on the ball bearings as pivots, with Kahler and Vigier being the suppliers of the most notable other examples.

The second major innovation of the ZR is a "Zero Point System", a.k.a. ZPS which consists of an extra set of springs and a linkage designed to help the tremolo return accurately and quickly to its neutral position, or zero point. The ZPS enhances tuning stability, particularly when bending strings. The ZPS system also facilitates simpler set-up of the tremolo and easier string changes. In addition, it is touted with an ability to maintain the tune of the remaining string should a user break one string while playing; it seems that while the ZPS helps somewhat in this situation, this claim is largely overblown. A version of the ZR without the ZPS was also offered on some models. 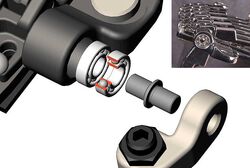 The pivot point on the ZR is basically aligned with the saddles, as opposed to at the leading edge of the tremolo with knife-edge designs. This leads to a somewhat different feel at the tremolo arm since the fulcrum is closer to the arm socket. This design also means that the height of the strings relative to fretboard is more consistent. With the ZPS installed, the ZR has a slightly stiffer feel when pushing down on the arm since there is an extra set of springs involved. Since the ZPS hastens the tremolo's return to the neutral point, it limits the amount of "flutter" when releasing the trem. With the ZPS removed the tremolo has a more traditional feel and the player can achieve plenty of flutter if desired.[1]

Other features of the ZR tremolo include a built-in intonation adjustment screw (stored onboard the tremolo body opposite the tremolo arm), an arm torque adjustment barrel to allow the user to modify the force needed to pivot the tremolo arm and offset saddle locking bolts to ease access to the bolt even while strings are under tension.

For 2005, the hex bolt adjustment mechanism was replaced with a knurled thumbscrew which made spring tension adjustment a tool free. This second version was paired with a slightly redesigned version of the zero point system which was referred to as the ZPS2.

Also in 2005 a ZR variant that incorporated a Downshifter D-Tuner on the low E string was introduced. This innovation facilitated simple and quick switching from E standard tuning (EADGBE) to Drop D tuning (DADGBE).

A new ZR2 with an evolutionary design was introduced for 2008. The ZR2 featured a redesigned pop-in tremolo arm (which it shares with the Edge Zero) in place of the screw-in arm on the ZR which was prone to breaking. The ZR2 also used a lighter metal in the thumbwheel assembly to shave weight. The ZR2 was offered on the upscale Prestige line, while the original ZR continued to be used on the standard models.

Starting in 2010 the pop-in arm of the ZR2 migrated down to the original ZR.

The ZR/ZR2 was discontinued after 2015. This decision seems to have been made due to a patent claim by Geoffrey Lee McCabe against some aspects of the ZR design.[2] With the Floyd Rose patents having lapsed several years prior, it seems that rather than pay royalties to license McCabe's patents the decision was made by Ibanez to simply switch back to knife edge pivot designs (such as the Edge) for which royalties were no longer required. 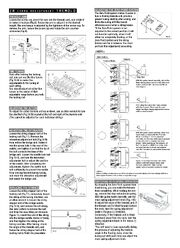