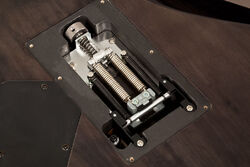 The ZPS3 (or Zero Point System 3) is a tuning stabilizer which is used in conjunction with some Ibanez double locking tremolo bridges. These include the ZR, ZR2, Edge Zero and Edge Zero II tremolos. The ZPS3 was introduced in 2008 along with the ZR2.

The ZPS system also facilitates simpler set-up of the tremolo and easier string changes. Ibanez claims that the ZPS prevents the other strings from falling out of tune if a single string should break while playing, but a look at the design and personal experience shows that this claim is overblown. Should the user want the tremolo to function as a fully floating trem with more ability to "flutter" when it is returning to its stable position, the ZPS system can be removed.

The ZPS3 is made of duralumin which is a strong but lightweight alloy of aluminum and copper.

The ZPS3 was preceded by the ZPS. Since its introduction other variants including the ZPS2 and ZPS3Fe have been produced.