The YJCRG1 is an RG series solid body electric guitar introduced by Ibanez in 2001. It was made in Japan by FujiGen as part of the J Custom series and was a spot model created exclusively for sale by the Japanese retailer Yamano Music.

The YJCRG1 features a two-piece Honduran mahogany body with a 4mm thick AAA grade flame maple top bolted to a maple and walnut neck with a 24-fret Honduran rosewood fingerboard with flame maple binding and offset abalone dot position markers at the twelfth fret. Components include a DiMarzio pickups with a pair of humbuckers flanking a single-coil, a Lo-Pro Edge double locking tremolo bridge with a locking nut and Gotoh tuning machines.

The YJCRG2 is a similar model with a South African mahogany body, hard maple fretboard and pearl gold hardware.

The YJCRG1 was offered only in 2001. Only six examples of each of the three finishes were produced. 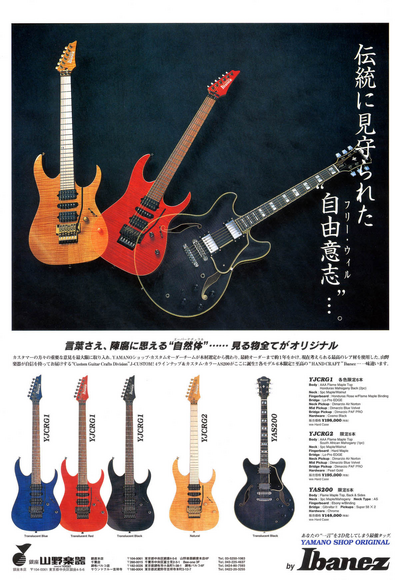