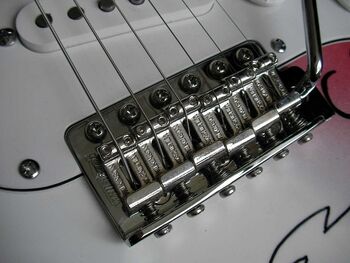 The Wilkinson WV6-SB, also referred to as the Wilkinson 5+1 hole tremolo, is a type of synchronized tremolo bridge produced by Wilkinson. It is installed on some models in the Andy Timmons series.

It is a drop-in replacement for a stock tremolo in a Fender Stratocaster. It was designed to improve tuning stability compared to the stock Fender tremolo.

The "SB" in the model name refers to the steel block which helps to magnify the overall sustain, brightness and top end, resulting in a more expansive tone.[1]

The "5+1 hole" designation refers to the fact that the top mounting hole is round to locate the vibrato laterally, while the other five holes are elongated to reduce the chance of the screws binding, which allows the tremolo to "return to zero" more accurately resulting in improved tuning stability.[1]

Paul Gilbert describes the WV6 tremolo as "low maintenance, easy to set up" and says that it "stays in tune."[2]

This model is similar to the more expensive Wilkinson/Gotoh VSVG tremolo.