The VM1 is a solid body electric guitar introduced by Ibanez in 1988. It is a signature model of American guitarist Vinnie Moore. It is the only signature model produced for Moore by Ibanez. The VM1 was also referred to as the Star-4, which is a name that Moore bestowed.

Although the VM1 body appears similar to that of the 1986 Roadstar II series body, it is in fact a new shape which was developed by Ibanez designer and luthier Mace Bailey with input from Moore. It has a Honduran mahogany body bolted to a maple neck with a 22-fret ebony fingerboard with dot position markers. It has dual DiMarzio Double Whammy humbucking pickups mounted in a pickguard and Sperzel locking tuners.

One uncommon feature of the VM1 is its Edge II tremolo, a non-locking version of the original Edge. The Edge II is only known to be used in one other model, the EX240. The VM1 was also the first signature model and among the first models overall to incorporate the sculpted All Access Neck Joint which has since become the standard for Ibanez. Another thing that makes it unique among Roadstar/RG models is the Strat-style angled input jack on the guitar's top.

The VM1 was available in two finishes: white with a black pickguard and a paint-spattered "Splash" finish with a white pickguard. It's believed that just 50 examples of each finish were produced, for a total of 100 guitars. The splatter finish guitars are occasionally referred to as the VM2. 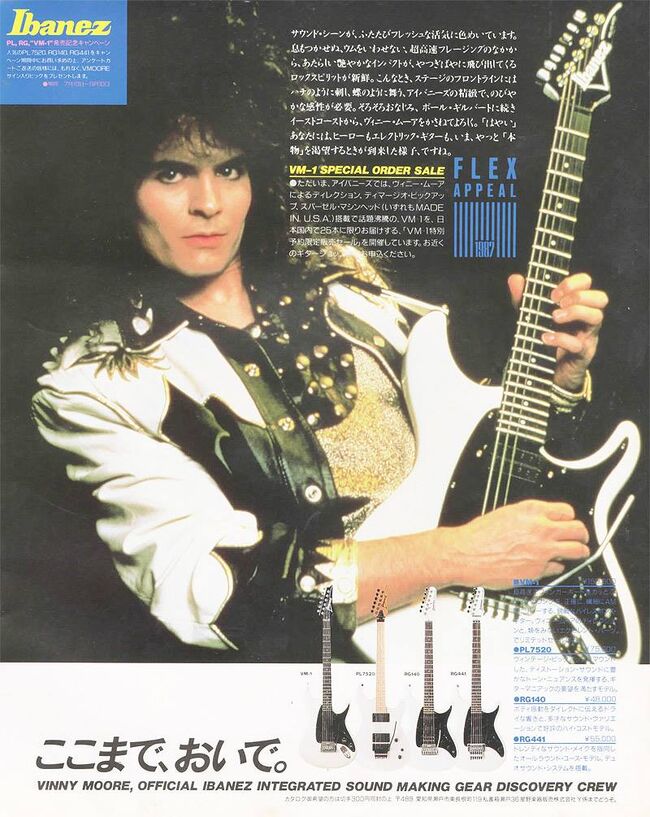 There are some subtle but noticeable differences between the "F7" (1988) and "F9" (1989) examples. One difference is with the tone and volume pots on the two guitars; the 1987 serial number guitars have push/push pots while the 1989 have push/pull pots. Another difference is the block on the Edge 2 tremolo. The '87's have a black block while the block on the '89 is silver. On the '87 tremolo block there are three holes (one for each spring), and a second set threaded hole where a screw is used to keep the springs in place should the tension on the bridge loosen. The '89 blocks have a similar set of holes but they are not threaded and do not have use screws to keep the springs in place. The screws on the '87 serve a similar purpose to the spring retainer bar on other popular Ibanez models, but none of the VM1's have a retaining bar. Another difference between the '87 and '89 VM1's are the Sperzel tuners. The '87 VM1 tuners have a star logo on the locking mechanism, while the '89 VM1 tuners have a circular pattern on them. The colors used for the paint splatter effect on the SH guitars are different on the '87's vs. the '89's also. The '87's paint splatter colors are a lighter/more neon color compared to the '89 splatter colors. The white color of the guitar itself (for both the SH and WH) is also a different shade on the '87's vs '89's, as the '89's are noticeably more yellow. This could be due to a different shade of white being used or perhaps a different clear coat was used on the '89s that was more prone to yellowing with age.

The VM1 was discontinued after 1989. Moore and Ibanez split ways shortly thereafter with Moore switching to using (and endorsing) Fender Heartfields. 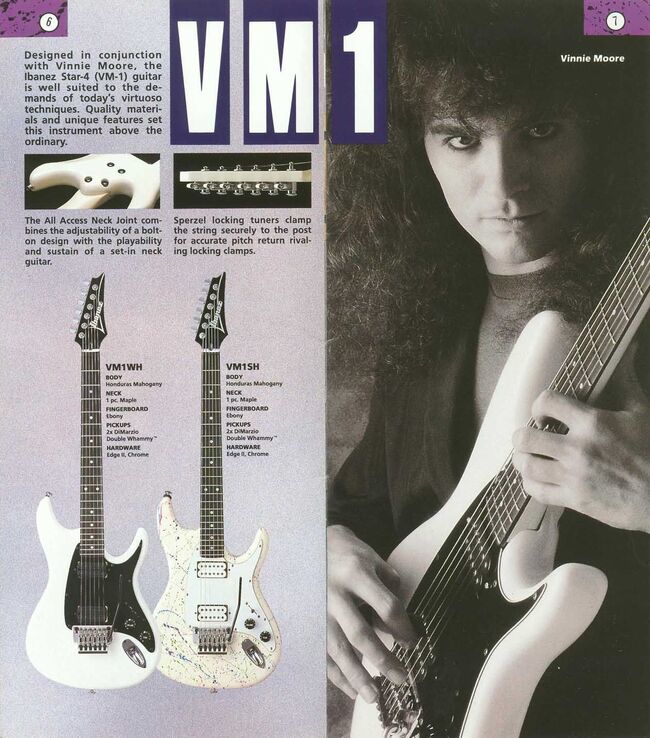