The USA Custom series is a line of solid body electric guitars produced by Ibanez in the early to mid 1990s. The series consists of a number of different lines. Some USA Custom guitars included bodies and necks produced in Japan which were finished and assembled in the United States, while others where completely US-made. All of the models produced under the USA Custom banner were RG series models.

The USA Custom Graphic Design (UCGR) series consisted of guitars with hand-painted graphic finishes produced by a few artists including Dan Lawrence, Rick Kleemann and Pamelina H. The bodies and necks for these guitars were produced by FujiGen in Japan and shipped to the US for finishing and assembly. The bodies came from Japan routed for only one humbucker, with additional pickup-routing and painting was done in the USA. As with the UCEW models, these could be custom-ordered with a variety of options.

The Metal Design (UCMD) series had various decorative finishes including animal prints, some of which were provided using a fabric covering. Similar to the Graphic Design series, these guitar were merely finished and assembled in the Unites States with parts from Japan.

The USA Custom Exotic Wood (UCEW) were produced for Ibanez by Hosono Guitars in California. As the name implies, this line featured exotic wood tops. They could be custom-ordered through Ibanez dealers with a number of possible options including pickup configuration and pickups, headstock, fretboard material and inlays and electronics. The founder and head luthier of Hosono, Tak Hosono, later was hired by Ibanez to open their Los Angeles Custom Shop.

After a gap in 1993 with no USA Custom models offered, the USRG line was introduced. These guitars were completely built in the United States by master luthier David Bunker and his team at PBC Guitars in Pennsylvania. These models featured PBC's patented "Tension free" neck which lacks a traditional truss rod. This line was produced from 1994 through 1996.

Since the demise of the USRG series after 1996, the only guitars produced by Ibanez in the United States are prototypes and custom guitars produced for Ibanez endorsers at the company's L.A. Custom Shop (LACS). 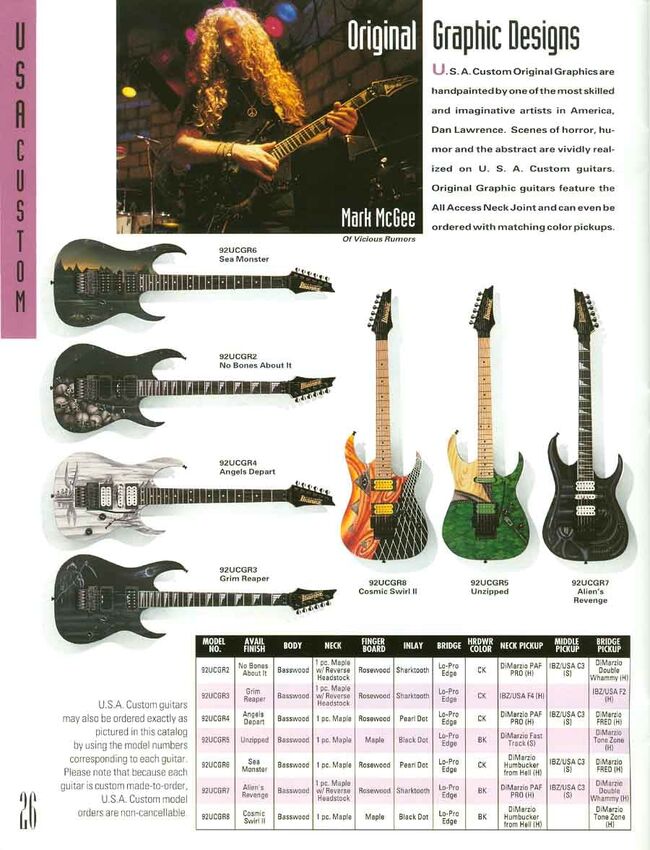