The TZ30 (alternately TZ-30) is a synchronized tremolo bridge developed and produced for Ibanez. The TZ30 was introduced in the mid-to-late 1990's replacing the TZ-II and TZ-6 tremolos. Ibanez also refers to the TZ30 as the Full Action II tremolo.

The TZ30 employs a non-locking, double pivot design which is reminiscent of early Fender tremolos. The double-pivot design wherein knife edges on the tremolo plate pivot against a pair of studs mounted in the body is slightly more complex than the simple six-point standard tremolo, but less complex than the Floyd Rose-style design of the Edge. Below the bridge is a metal block to which a pair of springs are attached to a claw mounted to the body. These springs offset the tension of the strings allowing the bridge to float. 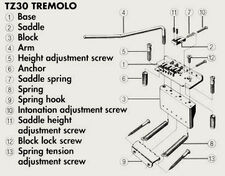 Other synchronized tremolos offered by Ibanez in the same era include the TT50 and TZ100.