The TC820 is a Talman series solid body electric guitar model introduced by Ibanez in 1995. The WN finish code was appended to the model name in some cases, since it refers to the veneer and not just the finish, in which case the model was referred to as the TC820WN.

The Talman series is a line of retro-styled guitars reminiscent of the Fender Telecaster.

The TC820FM is a similar model with a flame maple top.

The TC820 was offered only in Europe and was discontinued after 1996. 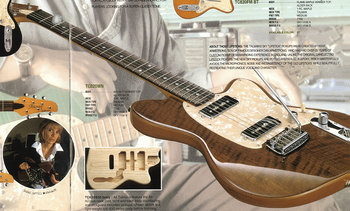 Retrieved from "https://ibanez.fandom.com/wiki/TC820?oldid=26718"
Community content is available under CC-BY-SA unless otherwise noted.