The TAM100 is an eight-string solid body electric guitar model introduced by Ibanez for 2013. It is a signature model of guitarist Tosin Abasi of the American progressive metal band Animals as Leaders. It was made in Japan by FujiGen.

The TAM100 features a AAA quilted maple top on a basswood body bolted to a wenge and bubinga neck with a 24-fret wenge fingerboard with mother of pearl block position markers. Components include DiMarzio Ionizer 8 pickups with two humbuckers (which can be coil-split) flanking a single-coil, a fixed bridge with a locking nut and Gotoh tuning machines. It is based on the RG2228.

The TAM10 is a less expensive mass market version of this guitar.

The TAM100 was discontinued in 2017 when Abasi left Ibanez to start his own guitar brand.

Specifications for TAM100
About this table
Portal: Signature series | 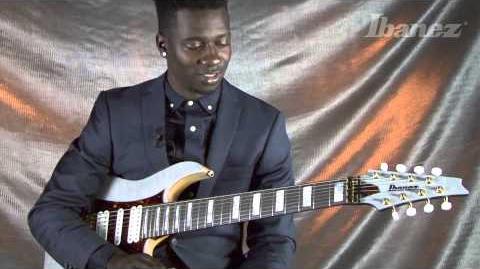 Retrieved from "https://ibanez.fandom.com/wiki/TAM100?oldid=80676"
Community content is available under CC-BY-SA unless otherwise noted.