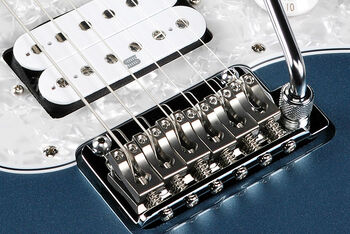 The T1802 is a type of synchronized tremolo bridge produced for Ibanez by Gotoh. It was introduced in 2018 along with the AZ series.

The T1802 is a dual-point tremolo with a pair of studs mounted in the guitar body upon which a knife edge rests forming the fulcrum on which the tremolo pivots. The height of the bridge can be adjusted by turning the mounting studs in or out. The studs can be locked into position by tightening an internal grub screw.

The bridge has six independent titanium saddles the height of which can be adjusted using two small allen screws in the leading edge. Intonation of each string is adjusted with a screw through the back of the tremolo plate into the saddle. The string spacing is 10.5mm for an E-to-E spread of 2-1/8" (54mm). The studs are spaced at 56mm. A 42mm deep machined steel sustain block extends beneath the bridge.

The 5.5mm diameter removable stainless steel arm is retained by a nylon collar which allows for tension adjustment. In addition to the supplied arm, the arm from the original Edge tremolo (including the carbon graphite version can be used in this tremolo.

The design of the T1802 is based on the venerable Gotoh 510T tremolo which is quite similar except for the titanium saddles. The T1802 is used on the AZ2402 among other models.

The T1502 is a similar tremolo with steel saddles and a cast zinc block.

Retrieved from "https://ibanez.fandom.com/wiki/T1802?oldid=44667"
Community content is available under CC-BY-SA unless otherwise noted.