The Sure Grip knob is a style of control knob used on several models of Ibanez guitars.

They are large diameter, round, flat, plastic knobs encircled by a ribbed rubber insert. They fit 6mm course (18-spline), split-shaft potentiometers. Aside from the rubber grip, they are similar in appearance to a traditional speed knob.

There have been at least three versions of the Sure Grip knob. The original was introduced around 1977 and offered in black and gold colors. These feature a molded channel on the side into which a ribbed rubber grip is placed. The body of the knob is plastic with molded markings with the color painted on the underside. The numbers 1 through 10 are represented in white with a line below them with small triangles midway between each number.

Initial versions of the Sure Grip (I) used a thick font for the numbers and markings; a slightly smaller font was adopted around June of 1978. A special version machined from solid brass and without any position markings was offered on the "Brass Beauties" Artist series models of 1981–82.

A second version, the Sure Grip II, came along for 1983 (introduced perhaps as early as August 1982[2]). The major change was that the rubber grip was enlarged and extended to the top edge of the knob. Additionally the grip now incorporated eight larger grooves in addition to the smaller ribs from the original band. The body of the Sure Grip II is molded of tinted translucent plastic (in gold/amber or black/smoke). Again the numbers and markings are molded into the body, this time with only even numbers represented and "┘└" markings where the odd numbers would be; the markings are painted white on the black version and black on the gold version. A solid brass version of the Sure Grip II knob with no position markings appeared on the DT555.

A third version, the Sure Grip III, was introduced around 2011. The rubber grip is essentially unchanged from the previous version but now the body is made of clear plastic with no molded numbers/markings. As with the original the color is painted on the underside. The numbers (1 through 10) are painted on using white paint with tic marks below at the full and half numbers.

Both Sure Grip (I) and Sure Grip II styles have been discontinued by Ibanez and thus can be difficult to find. Reproductions of these styles are offered by a company called Repro Guitar Parts. They also sell replacements for the rubber grip bands for these knobs. 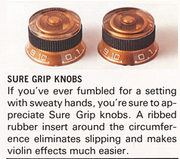 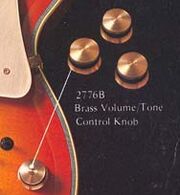 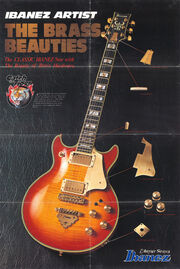 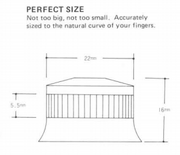 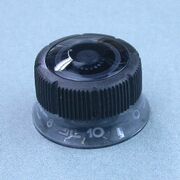 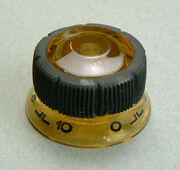 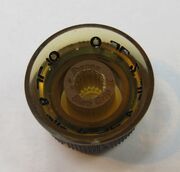 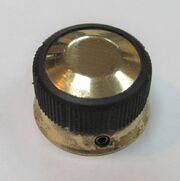 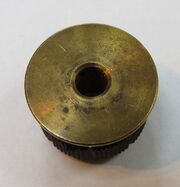 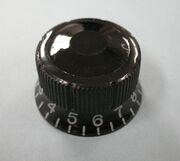 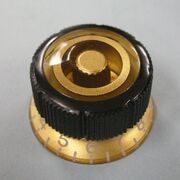 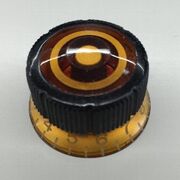 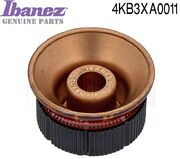