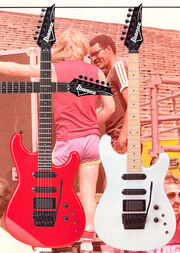 A Superstrat is a variant of the Fender Stratocaster style of guitar. There is no formal definition of a superstrat[1], but it usually refers to a guitar with an overall shape that derives directly from the Stratocaster featuring humbucking pickups, usually combined with single coil pickups, and a Floyd Rose style double locking tremolo. Ibanez has issued various superstrat style model series, with the most popular examples being the RG and S series.

All superstrat guitars have a overal shape that derives directly from the Fender Stratocaster. As opposed to more classic guitar-shaped models like the Gibson Les Paul, the Stratocaster has offset double cutaways and a six-in-line headstock. Over the time the shape was modified by most guitar manufacturers. This has resulted in generally sharper, more aggressive body styling than the original Fender design, especially in the Ibanez RG series.

The universal feature of superstrat guitars is the use of humbucking pickups. The Fender Stratocaster usually comes with three single coil pickups. In the early eighties, guitarists and guitar manufacturers started equipping Stratocaster style guitars with humbucking pickups, which were originally associated with Gibson Les Paul type of guitars. Humbucking pickups typically give the guitar a higher output and add warmth and depth. These were usually combined with single coil pickups to maintain the typical bell-like tone and clarity in some pickup positions. Usual combinations are HSH (Humbucking-Single-Humbucking) and HSS (Humbucking-Single-Single).

Superstrat guitars, especially the HSH configuration models, have become known as heavy metal guitars. The relative light weight and compact shape, combined with the versatility of the HSH layout and double locking tremolo makes them excellent lead guitar choices, although they still can play in more mainstream and modern music styles, such as Punk, Hard Rock and Indie Rock.

Ibanez issued various superstrat series. Apart from the aforementioned RG and S series, typical superstrat series are the Radius, Power and Maxxas series. Other brands with superstrats include Jackson (the Dinky and Soloist series) and BC Rich (Assassin and Gunslinger series).

Retrieved from "https://ibanez.fandom.com/wiki/Superstrat?oldid=13723"
Community content is available under CC-BY-SA unless otherwise noted.