Super 80 pickups are a model of magnetic pickups for solid body electric guitars that are designed by and produced for Ibanez. They are covered humbuckers which have an etched design of a hand with butterfly wings. This design inspired the nickname Flying Finger. They were introduced at the 1976 NAMM show,[1]. It is believed that development may have begun as early as 1974 and that pre-production versions may have been used by artists associated with Ibanez such as Bob Weir, Jerry Garcia or Bobby Cochran.[2]

The Super 80 pickups were developed in the mid-1970s at the behest of Elger, which was Ibanez' American subsidiary. They were looking for a pickup that was more sensitive and easier to play than Ibanez' existing pickups such as the Super 70. The hand/butterfly design on the cover reflected these design goals.[1]

The Super 80 was available with either chrome or gold plated covers and in versions with either 2 or four conductors. They have been seen potted with beeswax or with either clear or opaque epoxy. 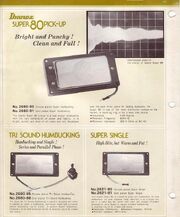