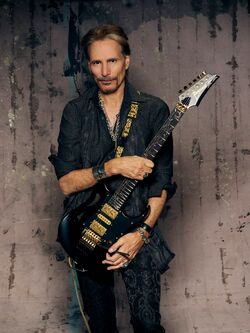 Steven Siro "Steve" Vai (born June 6, 1960) is an American rock guitarist, songwriter, vocalist and producer. As a guitarist, he is known for its work with Alcatrazz, David Lee Roth, Frank Zappa and Whitesnake as well as for his extensive solo career. As an Ibanez endorser, Steve Vai has multiple signature series products, including the six-string JEM series and seven-string Universe series of electric guitars and the Euphoria series of acoustic guitars.

Retrieved from "https://ibanez.fandom.com/wiki/Steve_Vai?oldid=18103"
Community content is available under CC-BY-SA unless otherwise noted.