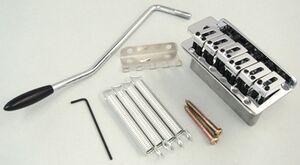 The Standard tremolo, also known as the STD tremolo or Std. tremolo, is a type of synchronized tremolo bridge designed and produced for Ibanez.

As the generic name implies, this term has been used to describe more than one model. In any case, the "standard tremolo" employs a simple design and is the most basic tremolo used in Ibanez guitars. It is a "six-point" tremolo in that the tremolo plate is attached to the body with six screws in slightly oversize holes. This design is simpler than the knife edge pivot (e.g. TZ-30, FAT-10, SAT30) or Floyd Rose-style (e.g. Edge, Edge Zero) tremolos seen on higher-end Ibanez models. The FAT-6 is another six-point tremolo.

The standard tremolo has six independent saddles which can be adjusted forward and backward to achieve correct intonation with screws running through the back of the tremolo plate. Additionally, each saddle has a pair of small hex screws at its leading edge which allow the height of the individual strings to be adjusted.

The standard tremolo is used for a variety of affordable Ibanez models, including the RG170, the TC220, the GSA60 and many others. A version of this tremolo for seven string guitars was also produced for the GRX720.