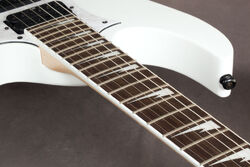 Sharktooth (or shark's tooth) inlays are a style of fretboard position markers used on many Ibanez models. They were introduced with little fanfare on the Pro Line series in 1986.[1] These inlays have become a signature look for the brand.

Some insist that sharktooth inlays were originally called "Himalayan markers" by Ibanez designers who created them to evoke the Himalaya mountain range of Asia. Other versions of this myth have Japan's Mount Fuji as the inspiration. No evidence has been found to support this theory.

Another story goes that as a marketing ploy, because Jackson Guitars had already created the popular sharkfin inlays, and due to the similar appearance of the two designs, they were marketed as looking like a shark's teeth with their pointy and jagged edges, thus the "sharktooth" moniker. The first reference I have found that applies a name to this inlay style is in the 1989 catalog, where they're referred to as "distinctive 'Shark's Tooth' inlays."[2]

Other signature inlays used by Ibanez include the Tree of Life (also called vine inlay) which originated with the Artist models in the 1970s and appear on some JEMs and many J Custom models and the wedge sharktooth, which consists of just the outline of the traditional sharktooth inlay.