The ST300L is a left-handed Studio series solid body electric guitar model introduced by Ibanez for 1979. It was made in Japan by FujiGen.

The ST300L features a double-cutaway body composed of a hard rock maple center block and ash outer blocks. This body is mated to a set-in laminated maple neck with a 24-fret rosewood fingerboard with abalone dot position markers. Components include a pair of Ibanez V2 humbucking pickups with exposed cream bobbins mounted in cream pickup rings with a pair of Tri-sound switches and a single volume control, an active EQ-2 Tone System, a Tune-o-matic style Gibraltar fixed bridge mounted on a sustain block embedded into the body, a Quik Change tailpiece and VelveTune II machine heads. The output is mounted on the face of the guitar. The EQ-2 Tone System consists of boost/cut controls for treble and midrange and an EQ toggle switch.

The ST300 is a right-handed version. 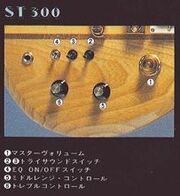