The SR305EB is a five string Soundgear series solid body electric bass model introduced by Ibanez for 2016. It is made in Indonesia as part of the standard line. It replaced the SR305B.

The SR305EB features a double-cutaway mahogany body bolted to a maple and rosewood neck with a 24-fret rosewood fingerboard with white dot position markers. Components include a pair of Ibanez PowerSpan passive pickups with an Ibanez custom preamp with a Power Tap switch and a three-band EQ, an Accu-cast bridge with 16.5mm string spacing, a plastic nut and Ibanez tuning machines.

The SR300EB and SR306EB are similar four and six string models. The SR305EBL is a left-handed version. The SR305E is a similar model with cosmo black hardware. 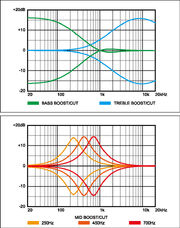