The Roadstar Pro series is a line of solid body electric guitars produced for Hoshino Gakki and sold under the Ibanez brand. The initial Roadstar Pro models were introduced in 1987. It replaced the Pro Line series as a collection of high-end Ibanez models.

Similar to the Pro Line series but unlike most Ibanez series designations, the Roadstar Pro designation isn't reserved for one particular body shape. It is a collection of multiple different models with different appearances. The first Power, Radius and Saber models were introduced as part of this series, as were the lesser known Ballback and Turbot models.

Ibanez phased out the Roadstar Pro designation after 1989. The last mention of it is in the 1991 Japanese catalog. The Power, Radius and Saber models were continued as separate series.

See the gallery below to check the main differences between the Power, Radius and Saber series: 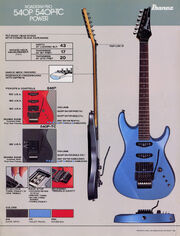 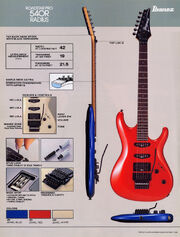 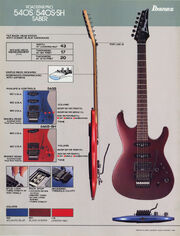