The RS1010SL is a Roadstar II series solid body electric guitar model introduced by Ibanez in 1983. It is a signature model for Steve Lukather who was the guitarist for the American rock band Toto.

The RS1010SL features an arched birdseye maple top with ivory binding on a basswood body bolted to a maple neck with an ebony fingerboard with custom "snowflake" position markers. Components include a pair of covered humbucking pickups with a custom SL Special at the bridge and a Super 58 at the neck with Duo Sound coil-split functionality mounted in ivory pickup rings and Smooth Tuner II tuning machines.

The initial RS1010SL for 1983 came equipped with a Hard Rocker Pro synchronized tremolo bridge, an unpainted headstock and neck, 21 frets and rubberized Sure Grip knobs. Several changes were introduced in mid 1984 including the newly developed Pro Rock'r double locking tremolo with a Top Lok string lock behind the nut, a painted headstock and neck, 22 frets and knurled metal Tek Grip knobs. This second version also had a facsimile of Lukather's signature engraved into the neck joint plate.

The RS1000 is a related model to the first generation RS1010SL. The RS1300 is similar to the second generation with a different bridge pickup and control layout and a rosewood fretboard.

The RS1010SL was discontinued after 1985. It was the only signature guitar Ibanez produced for Lukather. He subsequently had a signature guitar from Valley Arts and later from Ernie Ball Music Man.

Specifications for RS1010SL
About this table 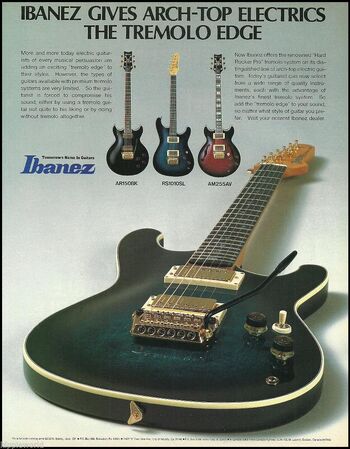