For a list of RGA models, see Portal:RGA series.

The RGA series is a line of solid body electric guitar models produced by Hoshino Gakki under the Ibanez brand. The first RGA models were introduced in 2005. The "A" in the series name is understood to represent the arched top of the RGA body.

The RGA body is a solid carved offset double cutaway body with pointed horns. It is based on the super-Strat style RG body but with a solid arched carved top. The series started as Prestige hard-tail models only but was expanded with non-Prestige models in 2009 and tremolo-equipped models and extended-range models in 2010.

Most RGA models feature a mahogany body and dual humbucking pickups. Many models have active pickups and an Active EQ preamp.

Although the RGA models are the first full production Ibanez guitar models with an arched top RG-style body, the idea wasn't completely new: it was done before on the limited edition 1997 RG-ARCH1, which was produced in very small numbers as part of the Japanese-handcrafted J Custom line. The RG-ARCH1 had a slightly different carve than the eventual RGA body, but it can still be considered the RGA's progenitor.

The first two RGA models were the RGA121 and RGA321F Prestige models which were released for 2005. They were intended to the fill the gap of high-end hard-tail RGs. Both guitars featured a mahogany body with maple top and the Gibraltar Plus bridge specially created for the series, with the RG321F being a bit fancier with the use of flamed maple and DiMarzio made pickups. A third model was introduced in 2007: the RGA121H featuring a full mahogany body and solid finishes. Another addition in 2007 was the MBM1 Matt Bachand signature model based on the RGA. 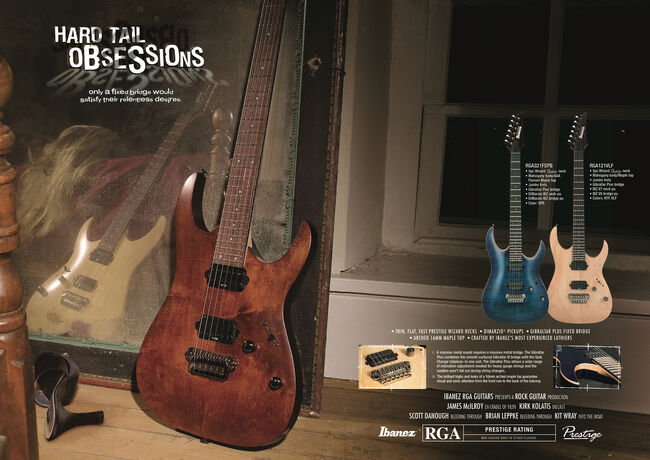 The series was completely revised in 2009. The new Prestige model was the RGA321, quite similar to the RGA321F, but now with Ibanez active pickups and special equalizing knob (see RGA Active EQ).

Completely new were the non-Prestige standard models, the RGA32, RGA42 and RGA42FM, all produced outside of Japan, featuring other Ibanez made active pickups and the newly introduced Gibraltar Standard bridge. Based on these standard models is the second Matt Bachand model, the MBM2, also introduced in 2009.

Another revision took place in 2010 with the RGA series expanding in multiple directions. After the 2009 standard series, more affordable RGAs were introduced in 2010 including new GIO series RGA models with the GRGA11 being the most affordable RGA to date.

Another new direction in 2010 was the introduction of tremolo-equipped RGA models, including the Prestige RGA420Z, standard series RGA42T and the GIO series GRGA22 and GRGA32T. For the Prestige RGA tremolo models an altered body shape was introduced resembling the Chris Broderick custom models.

The last major debuts were the seven-string models and even an eight-string model: the RGA427Z Prestige with tremolo and the RGA7 standard hard-tail 7-strings and the RGA8 8-string.

The last new feature in 2010 on an RGA is the set-in neck construction of the RGA72QM and RGA72TQM. A notable omission in the 2010 RGA lineup are Prestige hard-tail models, something the series originally was created for.

The RGA series nearly disappeared from production after 2013 except for a few models such as the GRGA42TQA.

After a gap of three years, the RGA32 returned, along with a new seven-string sibling, the RGA732. Several new RGA-bodied guitars in the metal-focused Iron Label line join it to produce the largest crop of RGA models in several years and the most new RGA models since 2011.