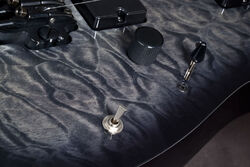 The RGA Active EQ is a feature introduced with the RGA series, using the tone knob not to cut the high as usual, but to shape the full range of frequencies instead. The system works with active pickups such as the LoZ pickups and the CAP-LZ pickups.

As the Ibanez marketing goes: "this EQ allows everything to massive fat low tones through the turn of one knob with almost no change in output volume. The tone changes in a smooth and natural curve, so it's easy and quick to find the tone you're looking for".

This feature is mostly found on the RGA series models and was first introduced to the Prestige series:

Later the active EQ was deployed to the normal production models. A toggle swith has now replaced the knob and works as an ON/OFF preset EQ :

Retrieved from "https://ibanez.fandom.com/wiki/RGA_Active_EQ?oldid=19525"
Community content is available under CC-BY-SA unless otherwise noted.