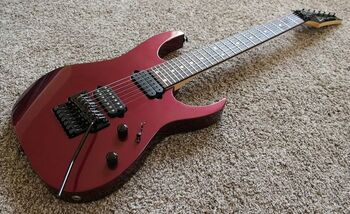 The RG7620 is a seven-string RG series solid body electric guitar model introduced by Ibanez in mid/late 1997. It was sometimes referred to in promotional materials as the RG7-620.

The RG7620 was one of the first seven-string RG series models offered by Ibanez along with its fixed bridge sibling, the RG7621. The only previous Ibanez seven strings were part of Steve Vai's signature Universe series.

The RG7620 features a basswood body bolted to a maple (maple and bubinga starting in 2000) neck with a 24-fret rosewood fingerboard with pearl dot position markers. Components include a pair of Dimarzio humbucking pickups, a Lo Pro Edge 7 double locking tremolo bridge. Although some Ibanez catalogs state that the RG7620 was equipped with DiMarzio Blaze pickups, the pickups were actually special DiMarzio 7 pickups, also known as Custom 7, which were made specifically for Ibanez's seven-string models.

For 2000, the RG7620 was updated along with the introduction of the RG7420. New features included a three-piece neck, new finishes and powder cosmo hardware.