The RG550 is an RG series solid body electric guitar model introduced by Ibanez in 1987. It was initially part of the Roadstar Deluxe series which eventually became the RG series.

The RG550 was the first RG featuring the new body shape which was designed based on input from Steve Vai in designing his first signature Ibanez model, the JEM777. The RG550 was introduced as a more affordable alternative for the JEM777.

The RG550 shares the same basic design and dimensions of the JEM, but eschews some of the JEMs more distinctive features such as the monkey grip and the lion's claw tremolo rout. These changes were made both to make the JEM more distinctive but also with and eye toward reducing production costs.

Like the JEM, the RG550 has a basswood body, a thin maple neck and a double locking Floyd Rose style tremolo bridge. Instead of the JEM's DiMarzio pickups, the RG550 is equipped with American designed Ibanez Vintage pickups. In place of the JEM's disappearing pyramid fretboard inlays, the RG550 has simple dots.

For 1990 the volume pot was relocated slightly further from the bridge pickup to prevent interference with the tremolo bar. The pickups also received a visual update with new logos.

For the twentieth anniversary of the RG series in 2007, the 1987 RG550 was reissued as the RG550MXX (maple fingerboard) and RG550RXX (rosewood fingerboard). For 2013 another reissue was offered in Japan as part of the limited edition Genesis Collection. 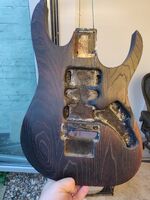 While most RG550s have headstocks which are painted to match the body, some 1989 and 1990 finishes, included Desert Sun Yellow, got black headstocks. After 1990, the color-matched headstocks returned for all finishes.

Although the vast majority of RG550s from this era are constructed of basswood, there have been a few, isolated examples of ash-bodied RGs which have been discovered when guitars were stripped for refinishing. No official explanation has been given for this, so it's not known whether this was due to experimentation or just a mix-up in the factory.

Several official ash-bodied RGs have been produced in the years since, including the RG547AH and the more recent RG652AHM.