The RG550MXX is an RG series solid body electric guitar model introduced by Ibanez in 2007. It was a reissue of the original RG550 in honor of the 20th anniversary of the model's debut.

The RG550MXX features a basswood body bolted to a maple and walnut neck with a 24-fret maple fingerboard with black dot position markers. Components include Ibanez pickups mounted in a black pickguard with a pair of V1/ V2 humbuckers flanking an S1 single-coil, an Edge double locking tremolo bridge and Gotoh tuning machines.

The reissue has a few features which were not typical of 2007-era models: the Edge tremolo (which had been retired in favor of the Edge Pro), the original tilt neck joint. The main difference between the reissue and the original is the neck: it has the original Wizard profile and instead of a one piece maple neck, the reissue has a five piece laminated maple and walnut neck more common on modern Ibanez guitars. The neck also is reinforced with KTS titanium rods.

There was also an RG550 reissue available with a rosewood fingerboard, the RG550RXX. Each of the 20th anniversary RGs came with a color matched, 20th anniversary case, and special strap and picks.

Specifications for RG550MXX
About this table 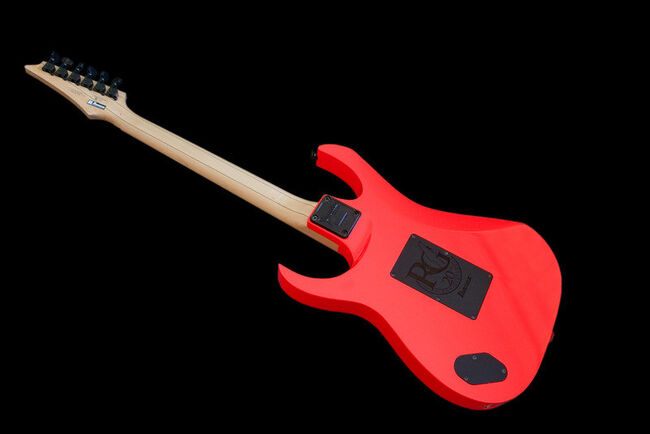