The RG3420 is an RG series solid body electric guitar model introduced by Ibanez in 2008. It was a spot model which was made in Japan by FujiGen as part of the upscale Prestige line. It was sold only in Russia and is known as the "Russian Gun".

The RG3520Z is a related regular production model with dot fretboard inlays and other cosmetic and component differences.

The RG3420 was produced in very limited numbers of perhaps as few as 15 and was offered only in 2008. 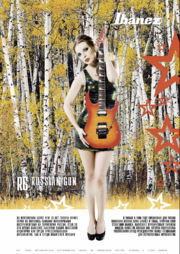 Retrieved from "https://ibanez.fandom.com/wiki/RG3420?oldid=52693"
Community content is available under CC-BY-SA unless otherwise noted.