The RG2011SC is an RG series solid body electric guitar model offered by Ibanez in 2011. It was made in Japan by FujiGen as part of the upscale Prestige line.

The RG2011SC was a Limited Edition Showcase model, which was produced in limited quantities. It was revealed at the 2011 Winter NAMM show, along with the DN2011SC.

Ibanez's stated vision for the RG2011SC was a an "Extreme Shredding Machine". To this end the RG2011SC is equipped with a extended 30 fret fingerboard accompanied by an extra-deep lower cutaway for access. The neck pickup has been eliminated since this design extends the fretboard into the space which would normally occupy. To make up for that loss a "Neck Pickup Simulator" preamp circuit was developed. This circuit, which is powered by an on-board 9V battery, uses signal from the bridge pickup to simulate the sound of the deleted neck pickup. In this way the typical 5-way lever functionality is retained.

The RG2011SC features an alder body with black finish and white pearloid binding bolted to a maple and walnut neck in a special extended All-Access neck joint with uses five screws rather than the typical four. The 30-fret rosewood fingerboard has pearloid dot position markers. Components include DiMarzio pickups mounted in a white pearloid pickguard with a Tone Zone humbucker at the bridge and a True Velvet single-coil in the middle position, an Edge Zero double locking tremolo bridge with a removable ZPS3 tuning stabilizer, a tilt output jack and Gotoh tuning machines. 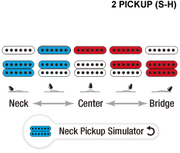 Retrieved from "https://ibanez.fandom.com/wiki/RG2011SC?oldid=60164"
Community content is available under CC-BY-SA unless otherwise noted.