The RG1570 is an RG series solid body electric guitar model introduced by Ibanez in 2003. It is made in Japan by FujiGen as part of the Prestige line.

The RG1570 replaced the classic RG570 which was introduced in 1989. The key difference from the RG570 is the new Edge Pro tremolo, replacing the original Edge.

The RG1570 features a basswood body bolted to a laminated neck with a 24-fret rosewood fingerboard with dot position markers. Components include Ibanez pickups with a pair of humbuckers flanking a single-coil, an Edge Pro double locking tremolo bridge with a locking nut and Gotoh tuning machines.

In 2005, the RG1570 was revised with a five-piece neck and new neck profile and some visual updates like hardware color and inlays.

In 2006 and 2007 an identical model was sold as the RG1570E. This was a spot model which didn't appear in any catalogs. It had identical specs to the regular RG1570 model, but was available in black, which was not a finish color available for the RG1570 in those years.

The RG1570L is the left-handed version and the RGR1570 is an RG1570 with a reverse headstock. A slightly upscale model is the RG2570EX and its successors. A special version with a swirled finish was offered in 2005 as the RG20051. The RGSP3 is a similar special model with wedge sharktooth inlays; the RGSP1 and RGSP2 are special models with a maple fretboard with wedge sharktooth inlays. 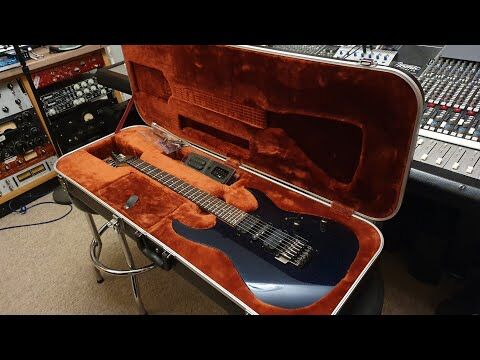 Retrieved from "https://ibanez.fandom.com/wiki/RG1570?oldid=73859"
Community content is available under CC-BY-SA unless otherwise noted.