The RG-PAINT is a mini-series of RG series solid body electric guitar models offered by Ibanez in 1999. They were produced in Japan by FujiGen as part of the upscale J Custom line.

Each guitar was hand painted, signed and numbered by the artist. A very limited number of examples of each were produced:

Specifications may vary slightly among examples, being that these are off-the-line models and Ibanez used them to test some features before mass-production. 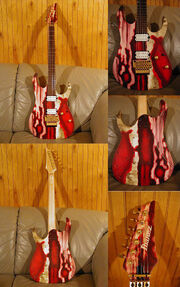 RG-PAINT4 with artist signature and limited run number
Retrieved from "https://ibanez.fandom.com/wiki/RG-PAINT?oldid=47832"
Community content is available under CC-BY-SA unless otherwise noted.