The Pro Rock'r tremolo is a guitar bridge developed and manufactured for Ibanez, presumably by Gotoh. It debuted in 1984 and was used most notably on Steve Lukather's signature RS1010SL guitar.[1]

The Pro Rock'r is a two-point tremolo which pivots on a pair of knife edges resting against two posts mounted in the guitar body. Strings are loaded from the bottom of the tremolo with the ball ends attached and sit in six independent saddles. Each string is securely held in the saddle using individual string pressure pads. It was paired with the behind-the-nut Top Lok or Top Lok II string locks to create a double locking tremolo system, the first such system employed by Ibanez.

The overall height of the Pro Rock'r could be adjusted by screwing the posts in or out. It was not recessed in the body like the more familiar designs which have followed but instead sat on or just above the top similar to a traditional Fender tremolo. The height of each saddle could be adjusted independently to set the string action. Each saddle can move forward and back using screws running through the back of the tremolo body to adjust intonation. A holding screw allows each saddle to be locked down once intonation is set. A fine tuning wheel on each saddle allows the strings to be tuned without unlocking the string lock at the headstock.

The Pro Rock'r used a newly designed snap-in arm mechanism. Arm torque is maintained by a pair of teflon bushings which are fitted on the arm. These bushings wear over time and can be replaced to regain the desired torque. This arm mechanism outlived the Pro Rock'r and was retained on future Ibanez tremolos.

The process of changing strings with a Pro Rock'r is somewhat akin to the method used for a steel-string acoustic guitar, with the pressure pads and their retaining screws playing the role of the acoustic bridge pins. The process should be something like:

Pro Rock'r tremolo on an AR350 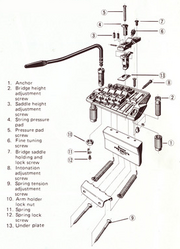 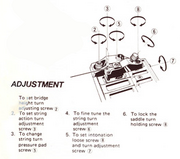 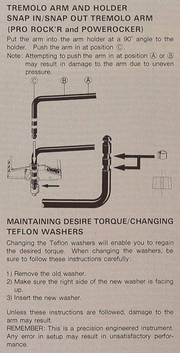 The Pro Rock'r was discontinued after 2015 with the introduction of the Edge tremolo which is based on a Floyd Rose design.