The Powerocker tremolo is a guitar bridge developed and manufactured for Ibanez. It debuted in 1984.

The Powerocker is a non-locking synchronized tremolo which replaced the earlier Hard Rocker and Hard Rocker Pro tremolos. It pivots against a plate which is screwed to the top of the guitar. Rather than employing a more typical knife-edge design, the pivot points are rounded. This design, which is retained from the Hard Rocker, is meant to reduce friction wear and provide smoother rocking action.

The Powerocker bridge consist of a metal baseplate which is bent upwards in the rear. Below the baseplate is attached a cast metal block. A variable number of springs are attached to this block and then to a claw mounted in the rear of the guitar. The position of the claw is adjustable to allow the position of the tremolo to be set.

Resting on the baseplate are a set of six individual saddles. These are attached by means of a screw running through the back of the baseplate. This screw can be adjusted to set the intonation by moving the saddle fore and aft. Additionally the height of each string can be adjusted by raising or lowering a pair of grub screws located in the leading edge of each saddle.

The strings are retained by means of a Quik Change mechanism which is adapted in principle from the tailpiece which shares its name. The ball end of each string is anchored in the bridge block, which allows for brighter tone and longer sustain.

The Powerocker uses a snap-in arm mechanism which is similar to that employed later by the Edge tremolo.

The Powerocker Special was a customized version of the Powerocker tremolo used on British guitarist Allan Holdsworth's signature AH10 and AH20 models as well as a few other models. It has an aluminum block and a shorter arm, among other differences.

The Powerocker DX is a version which adds fine-tuners to the saddles for use with a string lock at the nut. It was later renamed the Powerocker II.

The Powerocker was discontinued after 1987 in favor of the Edge tremolo which is a double locking tremolo based on a Floyd Rose design. 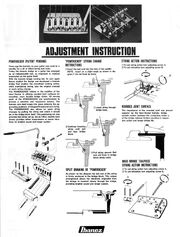 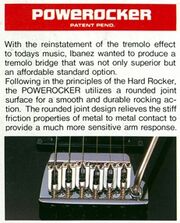 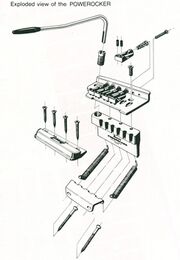 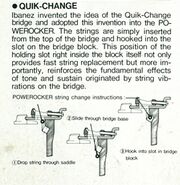 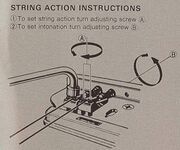