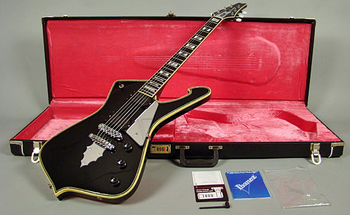 The PS10R is a solid body electric guitar model introduced by Ibanez in 1992. It is a signature model of guitarist Paul Stanley of the American hard rock band KISS. The PS10R is also referred to in some cases as the IC1000[1] or perhaps the IC500.[2]

The PS10R features a mahogany body with a maple top with a set-in maple neck with bound rosewood fingerboard with block inlays. The body has a multi-layer binding with abalone center which extends to the headstock. Components include a fixed bridge with decorative tailpiece and dual Ibanez Vintage humbucking pickups with individual volume controls. It has a chrome pickguard and clear truss rod cover printed with "PS10 Limited Reissue".[1] 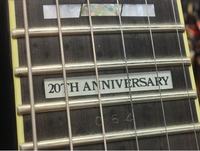 The PS10R was released to commemorate the 20th anniversary of the founding of KISS. It is a reissue of Stanley's original PS10 from the late 70s. It is believed that just over 500 (perhaps 511) PS10Rs were produced. Of these, 200 were earmarked for the US market and these have an inlay at the 21st fret which reads "20th Anniversary". The remaining examples which primarily went to Japan and Europe have "Limited Reissue" inlays instead. All PS10Rs also have a number stamped at the 22nd fret which is perhaps a production number, although that is unclear.[1]

The PS10R was a spot model which never appeared in any Ibanez catalog. However, a couple of years later followed the PS10II, PS10LTD and PS10CL models which had full production runs.[2]