The PGMFRM1 is a PGM series solid body electric guitar model introduced by Ibanez in 2009. It is a signature model of American guitarist Paul Gilbert. It was built in Japan by Sugi.

The PGMFRM1 is a completely new design and not related to previous PGM models. It was issued in the 20th anniversary year of the PGM series.

Paul Gilbert designed the guitar by reversing the original Iceman body shape and adding a cutaway.[1] The design was originally known as the 'Reverse Iceman', until a fan suggested the 'Fireman' (i.e. the opposite of an Iceman) moniker after seeing the guitar in a video Paul Gilbert posted on the internet.[2]

Features include a korina body and neck, DiMarzio pickups and the Gibraltar II fixed bridge. The triple single coil pickup configuration is a first for the PGM series.

Only 45 examples of this model were made. Another Fireman model with two humbucker pickups was released concurrently as the PGMFRM2.

Specifications for PGMFRM1
About this table 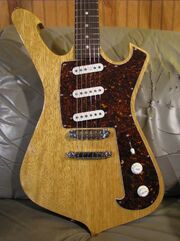 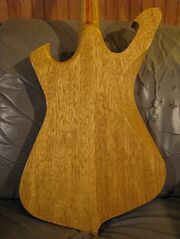