The OGE1086TFB tremolo is a guitar bridge developed and manufactured for Ibanez, presumably by Gotoh. It debuted in 1985 on a handful of Axstar series models.

The OGE1086TFB is a single locking tremolo system in which the string is locked only with a string lock on the headstock behind the nut. It is a dual point tremolo in which a pair of knife edges on the tremolo plate pivot against a pair of studs mounted into the top of the guitar. 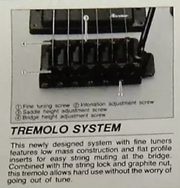 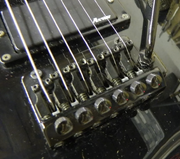 Retrieved from "https://ibanez.fandom.com/wiki/OGE1086TFB?oldid=45306"
Community content is available under CC-BY-SA unless otherwise noted.