The Maxxas series is a line of electric guitar models produced by Hoshino Gakki and sold under the Ibanez brand. Though the Maxxas series was short-lived, it introduced many groundbreaking concepts which would prove pivotal for the company's future designs. The first Maxxas model was introduced in 1987.

The idea for the Maxxas originated from design work that had been ongoing within Ibanez's U.S. subsidiary Hoshino USA. The group had been focusing their effort on creating a US-made guitar which had at this point gone through several iterations. The Maxxas was the group's first real attempt to create a guitar design from scratch without trying to emulate an existing style.[1]

Hoshino USA's guitar specialist, Rich Lasner, had the idea to create a semi-hollow body guitar with no sound holes. Lasner wanted to produce a small guitar that would approximate the sustain and tone that he could achieve from a hollow-bodied Gibson ES-335.[2] Hoshino guitar tech Mace Bailey made a prototype of Lasner's vision, hollowing out the body with a router and creating a double cutaway design with blocky, crystal-cut edges. This first design was dismissed by Hoshino USA president, Ken Hoshino, as being too primitive; Hoshino called it a "potato-caster".[1]

The group took this setback in stride and recruited Hoshino's advertising director and graphic designer, Bill Reim, to help rework the design. Reim started working with clay to create a new shape that incorporated Lasner's semi-hollow idea but would be more ergonomic and comfortable for the player. In addition to making the body smoother with a thin edged aerofoil-like shape, the group designed the new All Access neck joint to eliminate the bulky heel of the traditional bolt on neck joint with a metal plate. The new design had a rounded heel with countersunk screws and no plate.[1] The design also featured a thin, flat neck shape.

The new design was approved and the group took it to FujiGen to bring it to production. Unfortunately, FujiGen didn't have the equipment or experience to realize the hollowed-out design. However, they produced a solid body guitar which incorporated the Hoshino group's swoopy, streamlined body shape. This guitar, the MX2 went on sale in 1987,[1] a year which also saw the introduction of Steve Vai's first JEM model as well as the now-iconic RG550.

Risk-averse Ibanez executives wanted to limit the potential damage the Maxxas experiment, if it were to fail, would do to the Ibanez brand. For that reason, they marketed the Maxxas as "a division of Ibanez", with the MAXXAS name given prominence on the guitar's headstock.[1]

For 1989, FujiGen had figured out the manufacturing intricacies involved in producing the original semi-hollow design and so the MX2 was replaced by the MX3, MX4 and MX5.

The MX3 was relatively similar to the MX2 except for the obvious changes with the chambered body and a newly designed HQ stainless steel synchronized tremolo replacing the MX2's Edge. 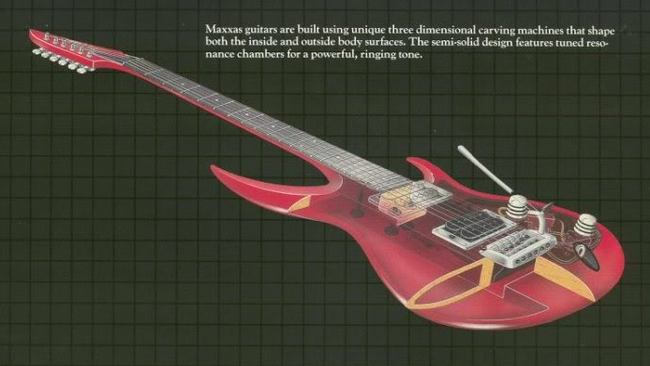 The MX4 and MX5 both featured a deeper lower scoop which allowed access all the way to the 29th fret. Due to the extended fretboard, these models had only a single pickup. The MX5 shared the HQ tremolo of the MX3 while the MX4 had a fixed bridge. Although these models appeared in the 1989 European catalog, it's not clear whether any non-prototype models were actually produced and sold to the public. In any case, they were almost certainly never offered for sale in the United States.[2]

The MX4 and MX5 were discontinued in 1989, while the MX3 lived on a bit longer. However, after 1989 the Maxxas experiment had run its course, being overshadowed by the expanded JEM line and rejuvenated Roadstar/RG models, and doomed by Ibanez lack of promotion.[2]

While the Maxxas line was gone, its legacy lived on. Its innovative all-access neck joint was added to the JEM and RG lines starting in 1994. In addition the clay modeling processes introduced during the Maxxas design were adopted as standard practice, and echoes of the Maxxas swoopy shape can be seen in the Radius and Saber series (which would eventually become the S series). The partnership with DiMarzio that was fostered with the new pickups created for the Maxxas would also become a foundation of future Ibanez products.[3] Meanwhile Gotoh expanded the Maxxas' locking tuner design into their whole range of tuning machines.[1] The Maxxas' thin neck shape would later be refined into the iconic Wizard neck.

It was also a Maxxas which helped convince Steve Vai to come to Ibanez as an endorser. At the time Vai, who was a member or David Lee Roth's band, was being wooed aggressively by Kramer, Yamaha and other guitar companies, but Ibanez desperately wanted him to become the face of their franchise.[4]

Lasner presented Vai with a prototype of the semi-hollow Maxxas prior to a show in the fall of 1986, but the chambered body quickly proved to be an issue as it produced horrific feedback when Vai plugged it into his stage amps and played at his preferred performance volume during a sound check.[5]

Hoshino USA created a new customized Maxxas prototype with a solid body and an Edge tremolo. This prototype would become the basis of the MX2. The prototype was finished in a garish green and pink snakeskin pattern with the knowledge that Vai favored attention grabbing color schemes.[6] Ibanez worked with Vai's parents to get the guitar placed under the family Christmas tree. The Maxxas demonstrated that the company was willing and able to think "outside the box" when it came to guitar design, which was important to Vai, and he signed on shortly after receiving the gift.[5]