The Ibanez MWM10 is a signature model of Maik Weichert, guitarist for the band Heaven Shall Burn . It was released in 2015 as an exclusive model for the online store Impericon.de.

The MWM10 is based on the S model but features a number of unique features, such as a reverse headstock, EMG active pickups and a three-way toggle switch.

Only 30 specimen were produced. Each one was signed on the cavity plate by Maik Weichert, and came with a signed certificate of authenticity indicating the production number.

However, more MWM10's Popped up in German online stores, such as Thomann, later on in 2015. This makes it unclear how many actually exist. 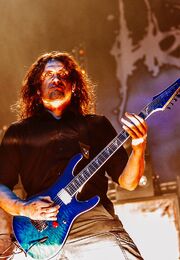 Maik Weichert live with his MWM10
Community content is available under CC-BY-SA unless otherwise noted.