The MTM100 is a solid body electric guitar model introduced by Ibanez in 2012. It is a signature model of Mick Thomson, lead guitarist for the American band Slipknot and part of the MTM series. It was produced in Indonesia

Along with the new MTM10, the MTM100 replaced the RG-bodied MTM1 and MTM2. The body of the MTM100 and MTM10 is borrowed from the Glaive series, which is part of the Ibanez' X series of extreme-shaped guitars.

The MTM100 features neck through body construction with mahogany body wings on a titanium reinforced maple and walnut Wizard III neck with a 24-fret rosewood fingerboard with special "seven" inlays. Components include a pair of Mick Thomson's signature Seymour Duncan Blackouts EMTY active humbucking pickups mounted in metal pickup rings, a Fixed Edge III hard-tail bridge with fine tuners and a locking nut. It is equipped from the factory with .011–.049 strings and tuned down to Drop B.

The MTM10 is a more affordable, mass-market version of this model.

The MTM100 was discontinued after 2014 when Thomson switched back to the RG body with the new MTM1. 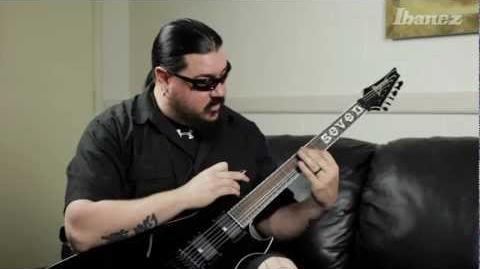