The MRG10 is an RG series solid body electric guitar model introduced by Ibanez in 2008. It was made in Japan by FujiGen as part of the high end J Custom line. It was a spot model which was sold exclusively by musical instrument retailer Kurosawa Gakki in Japan.

The MRG10 features a flamed maple top on a chambered African mahogany body bolted to a maple and walnut Super Wizard neck with a 24-fret dark rosewood fingerboard with flame maple binding and abalone dot position markers. Components include DiMarzio pickups mounted in a white pearloid pickguard with a pair of humbuckers flanking a single-coil, an Edge Zero double locking tremolo bridge with a removable ZPS3 tuning stabilizer and Gotoh tuning machines.

The MRG8 and MRG9 were released concurrently. The MRG10 was offered only in 2008. 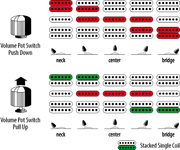 Retrieved from "https://ibanez.fandom.com/wiki/MRG10?oldid=49839"
Community content is available under CC-BY-SA unless otherwise noted.