The MMM1 is a solid body electric guitar sold by Ibanez. It was the signature guitar model of Mike Mushok, guitarist for American rock band Staind. It is the only model in the Mike Mushok series. It was introduced in 2003 and had a production run of five years.

The MMM1 is based on the SZ series models, but is a baritone guitar with a 28-inch scale length. Other features include the neck through body construction, Ibanez made Super 58 Custom pickups and the Gibraltar Custom bridge specially introduced for the MMM1.

Mike Mushok switched from Ibanez to PRS Guitars in 2008 and now has a signature PRS SE baritone model. 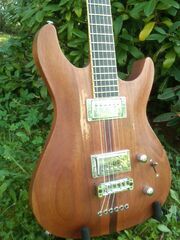 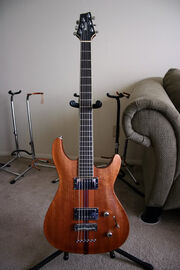 Retrieved from "https://ibanez.fandom.com/wiki/MMM1?oldid=39345"
Community content is available under CC-BY-SA unless otherwise noted.