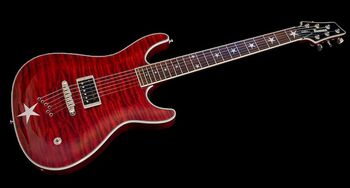 The MFM2 is a solid body electric guitar produced by Hoshino Gakki and sold under the Ibanez brand which was introduced in mid 2007. It is a signature model for Marty Friedman and is based on the SZ series. It was produced in South Korea.

The MFM2 features a mahogany body with a quilted maple top with binding mated to a set-in mahogany neck with a 22-fret bound rosewood fingerboard with star-shaped position markers. Components include a single Seymour Duncan designed humbucking pickup produced by Ibanez, a Gibraltar III fixed bridge with a staggered through-body string arrangement and Sperzel locking tuners. In addition to the star fretboard inlays, the body has a white star inlaid near the bridge. The only control is a kill switch for the pickup.

The MFM1 is a similar model with a second pickup and a different finish.

The MFM2 was sold only in the Japanese market and discontinued after 2008.