Ibanez Wiki
Register
Don't have an account?
Sign In
Advertisement
in: Guitar models, Guitar models manufactured in Japan, New in 1979,
and 7 more

The MAC10 is an Acoustic guitar model manufactured for Hoshino Gakki and sold under the Ibanez brand. It was introduced in 1979 & was produced in Japan.

In early 1974, British guitarist Maurice Summerfield contracted Hoshino Gakki of Japan to build copies of the legendary Selmer Maccaferri guitar. These guitars were built by the Kiso Suzuki factory and sold under the brand name CSL. Around 1,300 of these guitars were made.

Later, Mario Maccaferri himself took interest in the project which resulted in the MAC10 model produced by Ibanez from 1979 to 1984. The MAC10 featured numerous design improvements and sold for almost twice the price of the CSL model.

Only 440 units were produced.

In the later years of production Maccaferri became critical of the instruments quality and refused to sign the label.

The MAC10 is the only reissue ever approved by the Maccaferri and signed by him.

The MAC-10 is faithful to Mario's original "Grand Bouche" model with it's signature D-shaped soundhole. This design is renowned for it's increased bass response, and is a versatile instrument for either rhythm or lead work. This example is made with the traditional 650 mm scale, and sports a very generous 1 15/16" nut for easy fingering. In addition, the soundboard is canted between the bridge and tailpiece in the traditional 'pliage' style of the authentic vintage Selmer guitars. With back and sides of handsome arched Indian Rosewood, laminated for strength and stiffness in the traditional Selmer style, the body makes a brilliant platform for the solid bookmatched Sitka spruce top.

- Some of the unique features of the MAC10 includes: 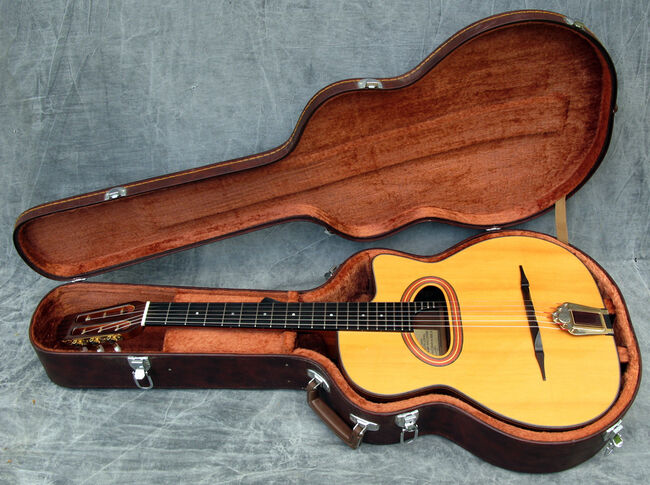