The Lo-Pro Edge, sometimes written as Lo Pro Edge or just Lo Pro, is a double locking tremolo bridge that was introduced on Ibanez guitars in 1991. It is designed and produced for Ibanez by Gotoh.

The Lo-Pro Edge is a redesign of the original Edge tremolo which gives it a lower profile (hence the name). On the original Edge the string lock screws pass under the fine-tuners, while on the Lo-Pro Edge, the string locks and fine tuners are independent of one another. This design allows the Lo-Pro protrude less from the top of the body, minimizing interference with the player's picking hand and arm.

Like the original Edge, the Lo-Pro Edge is based on the Floyd Rose tremolo design which Ibanez & Gotoh licensed. In this design the strings are clamped at both the bridge and nut which effectively minimizes the length of the strings which contributes to increased tuning stability. 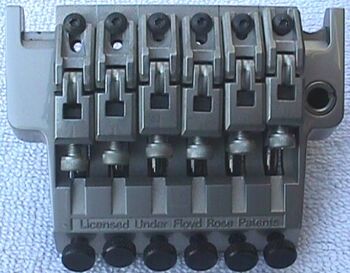 Also like its predecessor, the Lo-Pro Edge's body is cast from dense metal to increase mass which helps to increase sustain. It also retains the other key improvements introduced by the Edge including locking anchor studs mounted in steel sleeves, replaceable knife edges, and a convenient pop-in arm.

When introduced in 1991, the Lo-Pro Edge was fitted on the higher-end tremolo equipped guitars, such as Steve Vai's JEM models. The RG5xx, RG7xx, JS, and FGM models continued to use the original Edge. In 1992, it became the standard tremolo for all high-end models. Starting in 1997 select high-end RG models reverted back to the original Edge. 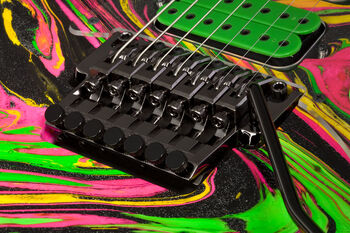 For 2010, the Lo-Pro Edge and original Edge were reintroduced on a few models. Both tremolos continue to be offered on a variety of high end models.

Retrieved from "https://ibanez.fandom.com/wiki/Lo-Pro_Edge?oldid=44685"
Community content is available under CC-BY-SA unless otherwise noted.