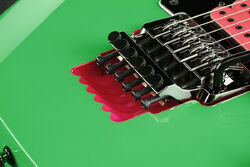 Lion's claw is the term used to describe the tremolo cavity shape of Steve Vai's signature JEM guitars. The cavity below the tremolo allowed Vai to manipulate the tremolo arm by either pulling up (raising the pitch) or pushing down (decreasing the pitch). The lion's claw itself is a series of six channels which allow room for the fine tuners located on the rear of the Edge tremolo.