The LR10 is a hollow body electric guitar model introduced by Ibanez for 1982. It is a signature model for American jazz guitarist Lee Ritenour. It is made in Japan by FujiGen.

Lee Ritenour's relationship with Ibanez began with the development of the 2630/ AS200 in the late 1970s with which Ritenour was involved along with Jay Graydon. Ritenour and Graydon each had treasured Gibson ES335s which they lent to that development effort for use as a "north star" in the design. A few years later, Ibanez approached Ritenour about producing a signature guitar which became the LR10. The LR10 is somewhat similar to the AS200 Ritenour helped design.

The LR10 features a semi-hollow, double cutaway body design with a flamed maple top with ƒ holes and ivory multi-binding on flamed maple back and sides with a hard rock maple center block mated to a set-in mahogany neck with a 22-fret Brazilian rosewood fingerboard with ivory binding and abalone dot position markers. Removable foam blocks are inserted in the hollow chambers of the body under the ƒ holes to prevent feedback while still allowing the instrument's acoustic character to ring through. Components include a pair of custom humbucking pickups with chrome covers and individual volume and tone controls, ivory pickup rings, a custom Tune-o-matic style bridge (stamped "Made in Germany"), a Quik Change tailpiece, a solid brass nut, a black pickguard, Sure Grip knobs, and VelveTune tuning machines.

The serial numbering system for the LR10 differs from the standard system used by FujiGen at the time. The system for these guitars appears to be LYPPPPY, where "L" presumably stands for Lee (Ritenour), the first and last digit together represent the year of production and the four digits between them are the production sequence for that year. This alternate serial number strategy is not widely known, which means that most LR10 owners (and sellers) believe their guitar were built in either December 1980 (in the case the number starts with "L80") or December 1981 (in the case of "L81"). In fact, no LR10s were produced before 1982.

Specifications for LR10
About this table 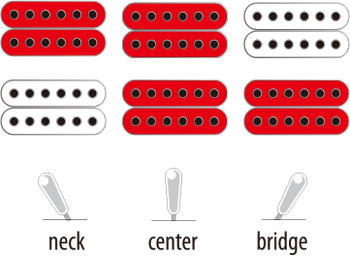