The KIKO200 is a solid body electric guitar introduced by Ibanez in 2018. It is a Signature guitar of Brazilian guitarist Kiko Loureiro of the metal bands Angra and Megadeth. The KIKO200 is made in Japan by FujiGen.

In a departure from the earlier KIKO models which were based on the S series, the KIKO200 appears to be based on an RGA series body.

The KIKO200 features a 3mm thick AAAA grade quilted maple top on a mahogany body bolted to a wenge and maple neck with a 24-fret Macassar ebony fingerboard with small dot position markers and a special inlay at the first fret. The output is a tilt-positioned jack on the side of the guitar rather than on the face like a typical S series guitar. The custom neck has a rounder profile than the traditional Ibanez Wizard profile with 24 frets, the last six of which are scalloped.

Components include DiMarzio pickups with a pair of humbuckers with coil-split functionality flanking a single-coil, an Edge double locking tremolo bridge and Gotoh tuning machines.

The KIKO200 replaced the KIKO100 which was the original flagship model in the Kiko Loureiro series. 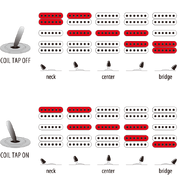 Retrieved from "https://ibanez.fandom.com/wiki/KIKO200?oldid=60141"
Community content is available under CC-BY-SA unless otherwise noted.