For a list of JS and JSA models, see Portal:Joe Satriani series.

The Joe Satriani series is a line of electric and acoustic guitar models manufactured by Hoshino Gakki and sold under the Ibanez brand. It is the signature guitar series of Joseph "Joe" Satriani (born July 15, 1956), an American instrumental rock guitarist, multi-instrumentalist and multiple Grammy Award nominee who is best known for his solo instrumental rock work.

The series was launched in 1990 with a trio of models, the JS1, JS2 (a.k.a. "Chromeboy") and JS3. The solid body electric guitars in the line are all based on the Radius series with a curvy double-cutaway body with an airfoil-like profile.

Satriani's first acoustic signature guitars, the JSA5 and JSA10 were released in 2010.

Satriani grew up on Long Island, New York. The story goes that he was inspired to study the guitar by the death of Jimi Hendrix.[1] Satriani studied music with guitarist Billy Bauer and with reclusive jazz pianist Lennie Tristano. Once he had learned some chops and was playing in a local band he started picking up work as a guitar instructor; among his first students was Steve Vai, who was a two years behind Satriani at the same high school.[2]

After high school, he attended Five Towns College on Long Island, studying music. Before finishing college, Satriani decided to move to Berkeley, California to pursue his music dreams. While in California Satriani picked up several guitar students who would soon begin to make names for themselves including Larry LaLonde, Rick Hunolt, Kirk Hammett, Andy Timmons, Charlie Hunter, Kevin Cadogan and Alex Skolnick. It was his former student Vai who inspired Satriani to sign with Ibanez. 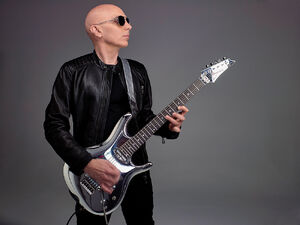 In addition to teaching, Satriani was also playing and recording with local Bay Area bands. But it was his solo instrumental work that brought him fame. He released his first album, Not of This Earth in 1986, but really gained attention with his blistering follow-up Surfing with the Alien the following year. This work brought the attention of Rolling Stones vocalist Mick Jagger who recruited Satriani to play guitar on Jagger's first solo tour in 1988.

Satriani has been regularly recording and releasing music since that time with nearly twenty solo albums along with a variety of work with other artists.