The JSART2 is a JS series solid body electric guitar model introduced by Ibanez in 2016. It is a signature model of American guitarist Joe Satriani which were made in Japan by FujiGen.

The JSART2 is a limited edition model which feature unique custom artwork by Satriani himself. These are similar to the JS25ART from 2015, but this time they are done on white guitar bodies rather than the JS25ART's black.

Only seventy examples are available, each of which is hand-illustrated and signed by Satriani himself, so each is a unique work of art. Satriani illustrated the guitars using Sharpie color pens on top of a white finish. The bodies were illustrated at the Ibanez Los Angeles custom shop and then returned to Japan for clear-coating and assembly.

Thirty examples are being offered in the United States and an additional 35 are being sold in non-US markets. In a promotional video (see below) Satriani states there are 76 total examples. Images of 70 of these have been released by Ibanez (see below), but the numbering goes up to #76. The missing six are numbered 46, 49, 50, 51, 59 and 74. Presumably one of these is the one that Satriani signs and then displays for the camera near the end of the video; the image features black swirls with white dots on them. This one does not show up among the images released by Ibanez. It is not known whether the rest of these "missing" six models were perhaps discarded due to quality issues with the artwork or with the guitar once it was assembled or whether they were simply held back either by Ibanez or Satriani.

In terms of specs, the JSART2 is a mix of the JS2400 & JS2450 models. The JSART2 has a basswood body with a maple and bubinga neck, a 24-fret rosewood fingerboard, dual DiMarzio humbucking pickups with coil-split functionality and high-pass filter, an Edge tremolo bridge with carbon fiber Ultralite tremolo arm, locking nut and chrome hardware.

Each guitar is signed on the back by Satriani and a hardshell case, strap, picks and Certificate of Authenticity are all included with each.

The JSART2 guitars were produced only in 2016. 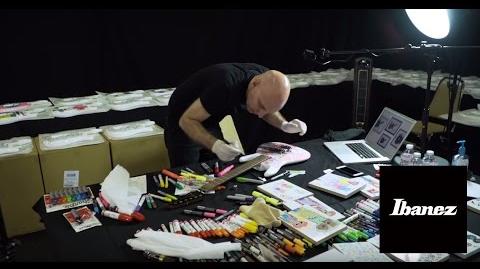 Retrieved from "https://ibanez.fandom.com/wiki/JSART2?oldid=44021"
Community content is available under CC-BY-SA unless otherwise noted.