The JS2400 is a JS series solid body electric guitar model introduced by Ibanez in 2010. It is a signature model of American guitarist Joe Satriani.

The JS2400 is the first JS model featuring 24 frets. Other modifications include an extended cutaway to allow access to the higher frets.

Satriani stated in an interview[1] that he always liked the idea of having 24 frets but never wanted to move the humbucking pickup in the neck position further to the bridge for tonal reasons. A solution was found in the DiMarzio Pro Track pickup, a single coil-sized humbucker mounted right up against the fingerboard. 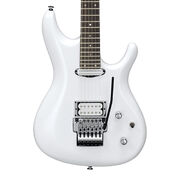