The JS1CR is a JS series solid body electric guitar model introduced by Ibanez in 2019. It is a signature model of American guitarist Joe Satriani which is produced in Japan by FujiGen.

The JS1CR is the fifth attempt at a guitar with a chrome finish after the original JS2 from 1990 and the JS10th from 1998, the second JS2 from 2005 and the previous year's 30th anniversary JS1CR30 which is basically identical. Satriani has always wanted such a guitar, but producing a guitar with a durable chrome finish has proved to be a challenge.

The JS1CR features an alder body bolted to a maple and bubinga neck with a 24-fret rosewood fingerboard with mother of pearl dot position markers. Components include an Edge double locking tremolo bridge with a locking nut and an Ultralite tremolo arm and a DiMarzio Satchur8 humbucking pickup in the bridge position.

Besides the finish the other defining feature of this model is the Sustainiac driver neck pickup. The Sustainiac feature is controlled by a push-pull on/off switch on the tone control as well as a 3-way toggle with three settings: harmonic, normal or mixed. Additionally the volume control has a push-pull switch which activates a high-pass filter.

The JS2480 is a similar model except for the chrome finish. 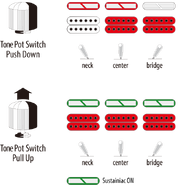 Retrieved from "https://ibanez.fandom.com/wiki/JS1CR?oldid=69318"
Community content is available under CC-BY-SA unless otherwise noted.