The JS100 is a JS series solid body electric guitar model introduced by Ibanez in 1994. It is a signature model of American guitarist Joe Satriani.

The JS100 is a more affordable JS model with Ibanez Axis pickups and a cheaper tremolo than the other JS guitars. Rather than being manufactured in Japan like the higher-end JS models, it was produced in Korea (from 1994 through 2008) and later Indonesia (2009 through 2014).

The JS100 was discontinued after the 2014 model year. It was replaced in the lineup by the JS140 which has slightly different components. 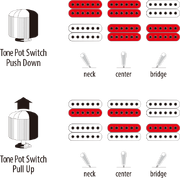